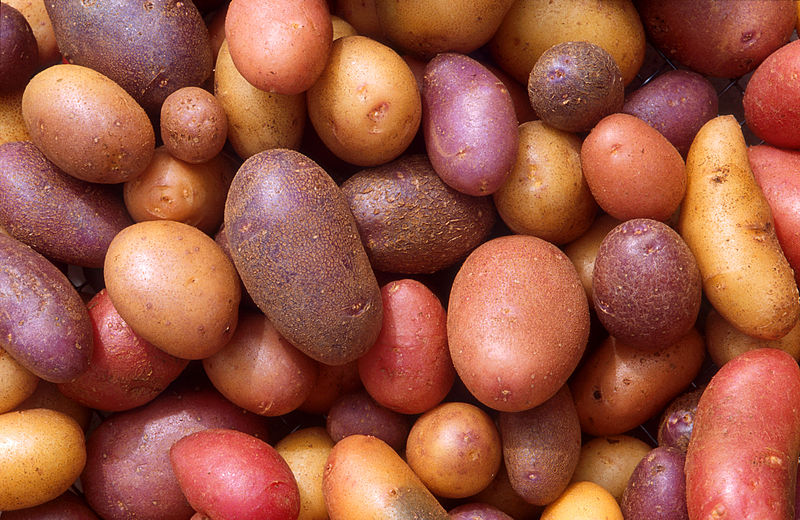 Potatoes are underground tubers that grow on the roots of the potato plant, Solanum tuberosum.

This plant is from the nightshade family and related to tomatoes and tobacco.

Native to South America, potatoes were brought to Europe in the 16th century and are now grown in countless varieties worldwide.

They’re generally eaten boiled, baked, or fried and frequently served as a side dish or snack.

Consumed since the nineteenth century, the potato quickly became the favorite vegetable in the world. Hundreds of varieties are present on the stalls, each reserved for a specific use. The potato is a real concentrate of energy and vitamins!

Carbs are the main dietary component of potatoes. Those cooled down after boiling may provide some resistant starch, which can improve gut health. Potatoes also contain small amounts of high-quality protein.

Usually potato weighs between 80 and 320 grams depending on the size. For instance, the color of skin and flesh varies from pale yellow to purple to pink.

More or less big, the potato has a pulp with different textures depending on the variety.

From a moderate caloric intake, the potato is very rich in carbohydrates. It also brings vitamins and nutrients. It is a real source of energy in winter.
The potato is eaten exclusively cooked. It lends itself to many gourmet preparations, fried, steamed, mashed, baked or in soup.

The cultivation of the potato covers an exceptional quantity of varieties. In this way, more than 150 different tubers are harvested. You will find on the stalls more than twenty of the predominant varieties. Usually classified according to their culinary use. Therefore, are the potatoes with firm flesh, with melting flesh, with floury flesh and the original ones.

To select good potatoes, use your senses of touch and sight. The culinary use must also be taken into account. So that the texture suits the recipe to which you intend them. These hardy vegetables should be kept cool and protected from light for preservation.

To choose right potatoes to follow the next rules:

The potato is a rustic vegetable, which nevertheless fears shocks. They may blacken it prematurely. Store this fresh product away from light, to prevent it from becoming green, bitter and dry. The ideal storage temperature is between + 6 and + 8 ° C. You can store the potatoes in the crisper drawer of the refrigerator.

The ways of cooking the potato are almost as numerous as its varieties. However, here are some ideas to combine and cook this tasty rustic vegetable.

Above all, spread vegetables under water to remove all traces of soil. Depending on your preparation, peel (or preserve the skin) the tubers with a small knife or a thrift. Once peeled, rinse the potatoes for frying to prevent them sticking together.

The great thing is that potato lends itself to different types of cooking. As steamed, oven baked, fried… Here are some tips for cooking.

For example if cooking in the water, plunge the potatoes in cold salted water and cook. Plant a sharp knife to control cooking. The blade must pass through the vegetable without any effort. Also, you can steam, preserving the skin, to preserve the maximum vitamins. 15 to 20 min in the oven to microwave enough to cook a potato to heart.
Put it in a hollow dish filled with a third of water, then cover with a film of food before starting the cooking. For homogeneous cooking, select potatoes of equivalent caliber. 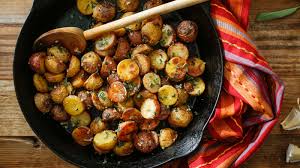 For example, the potato goes very well with dishes in sauce, with melted potatoes, which will gorge on the cooking juices. Also it goes great with light recipes made from fish and seafood. Or steamed with a small knob of butter.

Rare is the little gourmands who do not like the potato, whatever its preparation. From time to time, treat them to homemade fries, crispy! For instance, potato is one of the first vegetables that baby discovers during dietary diversification. Also, you can serve nature, with a little milk or butter to soften it. Or mix it with another vegetable. Such as zucchini or green beans.